An article written by Cosmetics Design-Asia – the full article can be found here.

No matter which side of the fence you sit on, there is one fact we cannot ignore – natural ingredients are not always the most environmentally responsible option.

‘We want naturals, but we are killing nature in the process,” said Peyman Salehian, CEO of Allozymes, a Singapore-based biotechnology firm.

Speaking to CosmeticsDesign-Asia, Salehian expressed his shock upon learning that it takes 10 tonnes of tomato skin to extract three kilograms of phytoene.

“The question for cosmetics today is: how much resources are needed to shift everything from synthetics to naturals? The answer is that it’s definitely not possible. If you wanted to do it, you would need land that is 70 times bigger than the earth itself Even then, it would be better to use those materials for food rather than a cosmetic ingredient.”

This has led companies to “copy and paste” what they find in nature using a bioreactor. However, this technology is costly and slow, Salehian continued. “It takes years and 90% of the time it fails.”

Salehian co-founded Allozymes in 2019 with the aim of developing natural ingredients in a more planet-responsible manner, while also reducing cost and time. The company’s is able to do so using its proprietary microfluidics technology.

‘We have 200 times higher chance of success compared to the current technology. So as a result, the engineering time is much shorter. So rather than years, it normally takes two months for us to engineer one enzyme,” said Salehian.

To explain it plainly, this technology allows the company to study and sieve out the right enzymes by using tiny water droplets as vessels so it can move through the hardware.

“Instead of putting [the enzyme] on a petri dish or a 96 well plate, you put it in a tiny droplet. Then these tiny droplets move through a channel and comes to our hardware which injects a substrate – sugar – inside the droplet and here the reaction happens and the product is produced inside a droplet.”

Using its proprietary software, the company is able to screen and sift through the enzymes and find what it is looking for. “With this, we screen 10 million enzyme variants per day,” said Salehian.

The benefits of this technology are tremendous. Firstly, with water droplets as a vessel, the company does not require the use of tools like petri dishes or 96 well plates. Secondly, it does not require a lot of substrates as it is working with tiny droplets.

Going back to the example of extracting ingredients from tomato skins, Salehian said this technology was able to produce 2,000 times more than conventional extraction. As a result, the company is able to produce phytoene at a much lower cost.

As an example, phytoene, is used in anti-ageing creams and as a supplement. However, it believes that the ingredient has a lot of potential as a natural sunscreen.

“It’s not used because its very expensive, so now we are opening up many doors for this material,” said Salehian.

Another cosmetic ingredient in the firm’s portfolio is bisabolol, which is conventionally incredibly unsustainable to produce or extract from the endangered candeia tree.

The company is in the midst of its Series A funding round that is set to close by the end of this year. With an injection of funds, the company is planning to expand its business globally. It already has a presence in Australia and the US and its next target is Europe. Stay in touch with the latest news from Allozymes. 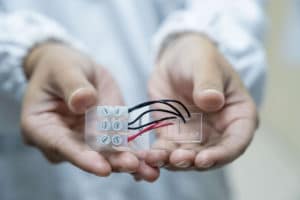 “Entrepreneurs to Watch: Meet the 45 startups handpicked by FoodBytes!”

An article written by Rabobank – the full article can be found here. The 45 startups selected to participate in the FoodBytes! By Rabobank food and